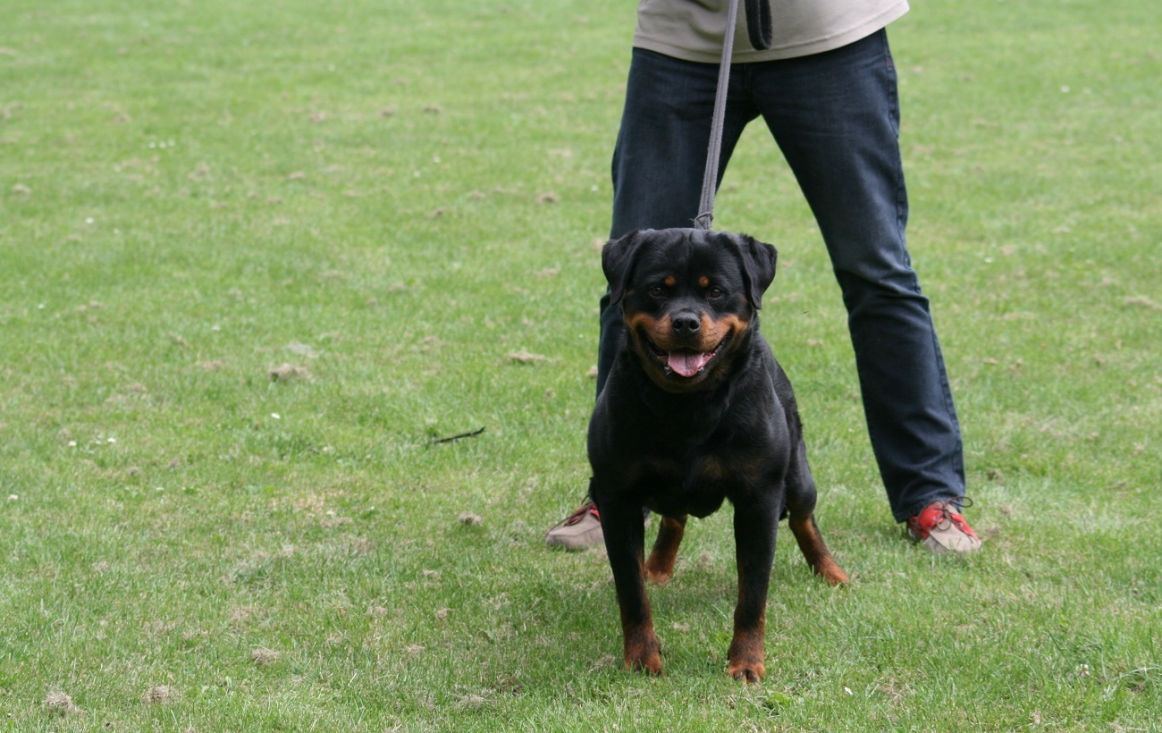 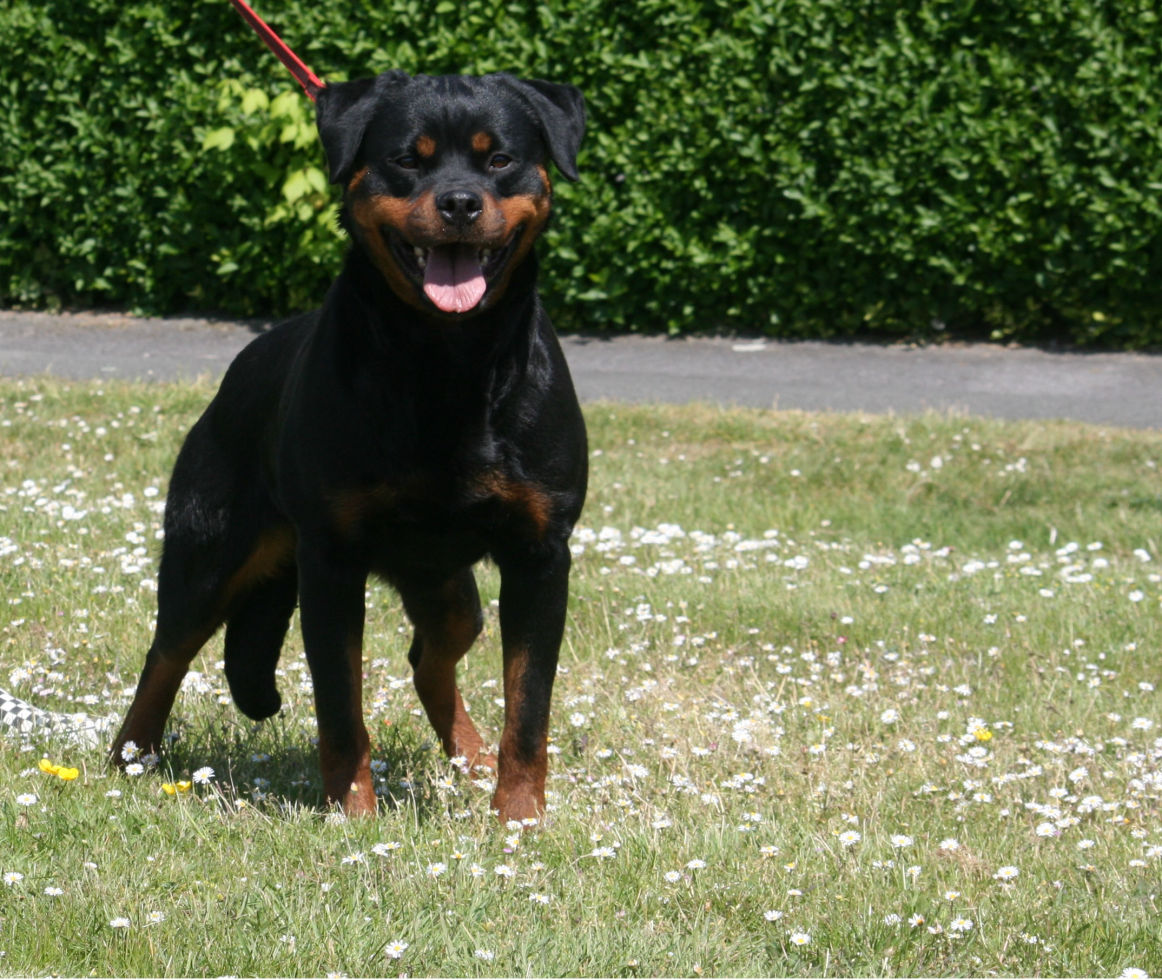 The rottweiler is considered to be one of the oldest dog breeds. Its origin goes back to Roman times. These dogs were kept as herder or driving dogs. They marched over the alps with the romans legions, protecting the humans and driving their cattle. In the region of Rottweil , these dogs met and mixed with the native dogs in a natural crossing. The main task of the Rottweiler now became the driving and guarding of the herds of cattle and the defence of their masters and their property. This breed acquired its name from the old free city of Rottweil and was known as the "Rottweil butcher's dog". The butchers breed this type of dog purely for performance and usefulness. In due course, a first rate watch and driving dog evolved which could also be used as a draught dog. When, at the beginning of the twentieth century, various breeds were needed for police service, the rottweiler was amongst those tested. It soon became evident that the breed was highly suitable for the tasks set by police service and therefore they were officially recognized as police dogs in 1910. Rottweiler breeders aim at a dog of abundant strength, black coated with clearly defined rich tan markings, whose powerful appearance does not lack nobility and which is exceptionally well suited to being a companion, service and working dogs.

GENERAL APPEARANCE
The Rottweiler is a medium to large size, stalwart dog, neither heavy nor light and neither leggy nor weedy. His correctly proportioned, compact and powerful build leads to the conclusion of great strength, agility and endurance.

IMPORTANT PROPORTIONS
The length of the body, measured from the point of the sternum (breast-bone) to the ischiatic tuberosity, should not exceed the height at the withers by, at most, 15%.

BEHAVIOUR / TEMPERAMENT
Good-natured, placid in basic disposition and fond of children, very devoted, obedient, biddable and eager to work. His appearance is natural and rustic, his behaviour self-assured, steady and fearless. He reacts to his surroundings with great alertness.

TAIL
In natural condition, level in extension of the upper line, at ease may be hanging.

LIMBS
Florequarters: Seen from the front, the front legs are straight and not placed too closely to each other. The forearm, seen from the side, stands straight and vertical. The slope of the shoulder blade is about 45 degrees to the horizontal.
Shoulders: Well laid back.
Upper arm: Close fitting to the body.
Forearm: Strongly developed and muscular.
Pasterns: Slightly springy, strong, not steep.
Front feet: Round, tight and well arched, pads hard, nails short, black and strong.
Hindquarters: Seen from behind, legs straight and not too close together. When standing free, obtuse angles are formed between the dog's upper thigh and the hip bone, the upper thigh and the lower thigh, and the lower thigh and metatarsal.
Upper thigh: Moderately long, broad and strongly muscled.
Lower thigh: Long, strongly and broadly muscled, sinewy.
Hocks: Sturdy, well angulated hocks, not steep.
Hindfeet: Slightly longer than the front feet. Toes strong, arched, as tight as front feet.

GAIT
The Rottweiler is a trotting dog.In movement the back remains firm and relatively stable. Movement harmonious, steady, full of energy and unrestricted, with good stride.
SKIN
Skin on the head, overall tight fitting. When the dog is alert, the forehead may be slightly wrinkled.
COAT
Hair: The coat consists of a top coat and an undercoat. The top coat is of medium length, coarse, dense and flat. The indercoat must not show through the top coat. The hair is a little longer on the hindlegs.
Colour: Black with clearly defined markings of a rich tan on the cheeks, muzzle, throat, chest and legs, as well as over both eyes and under the base of the tail.

FAULTS
Any departure from the foregoing points should be considered a fault and the seriousness with which the fault should be regarded should be in exact proportion to its degree and its effect upon the health and welfare of the dog.
General appearance: Light, weedy, leggy appearance. Light in bone and muscle.
Head: Hound-type head. Narrow, light, too short, long or coarse head. Flat forehead (lack of stop or too little stop).
Foreface: Long or pointed muzzle, split nose, roman nose (convex nasal bridge) or dish-faced (concave nasal bridge), acquiline nose, pale or spotted nose (butterfly nose).
Lips: Pendulous, pink or patchy, corner of lips visible.
Jaws: Narrow lower jaw.
Bite: Pincer bite.
Cheeks: Strongly protruding.
Eyes: Light, deep set. Also too full and round eyes, loose eyelids.
Ears: Set on too low, heavy, long, slack or turned backwards. Also flying ears or ears not carried symmetricaly.
Neck: Too long, thin, lacking muscle. Showing dewlap or throaty.
Body: Too long, too short or too narrow.
Back: Too long, weak, sway back or roach back.
Croup: Too sloping, too short, too flat or too long.
Chest: Flat-ribbed or barrel-shaped. Too narrow behind.
Tail: Set on too high or too low.
Forequarters: Narrow or crooked front legs. Steep shoulder placement. Loose or out at elbow. Too long, too short or too straight in upper arm. Weak or steep pastern. Spayed feet. Too flat or too arched toes. Deformed toes. Light colored nails.
Hindquarters: Flat thighs, hocks too close, cow hocks or barrel hocks. Joints with too little or too much angulation. Dewclaws.
Skin: Wrinkles on head.
Coat: Soft, too short or long. Wavy coat,lack of undercoat.
Colour: Markings of incorrect colour , not clearly defined. Markings which are too spread out.